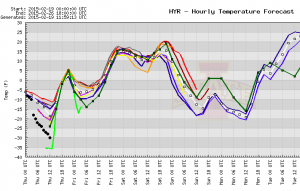 The Birkie is Saturday. The forecast low temperature on Saturday morning? 10˚. That’s cold—a couple degrees below average—but not too bad.

The current temperature in Hayward? -30˚. Not with the windchill. It’s thirty

below in Hayward. Or as they say this time of year: “Thirty.”

We’re very luck the race is two days later. While the race has started in temperatures around or a bit below 0, there’s no way the Birkie could have held the race today without a significant delay. But the race can’t be pushed too far back because many later-wave skiers take several hours to get to Hayward, and darkness falls around 10. I would bet the Birkie staff is thanking their lucky stars this morning that they don’t have to deal with the logistics of a -30 race start.