In addition to time point place correlation, we can calculate the amount of time—and minutes per kilometer—between the timing wires. The wires are at Timber Trail (9k), OO (22.8k FS /26.2k CL), Mosquito Brook (38.1, 42.1) and the finish (50/54). If you look up your time (at the Birkie, and, soon, here) you’ll be able to see your pace per kilometer for each of these segments. The times are highly correlated—if you ski the first segment fast you are very likely to ski the fourth fast. However, if you look at the change in split paces versus the overall average, some very interesting trends emerge.

(Note: we only ran these data for men skaters—the largest single field.)

Here’s a chart. Click to enlarge. We’ll make sense out of it in a second: 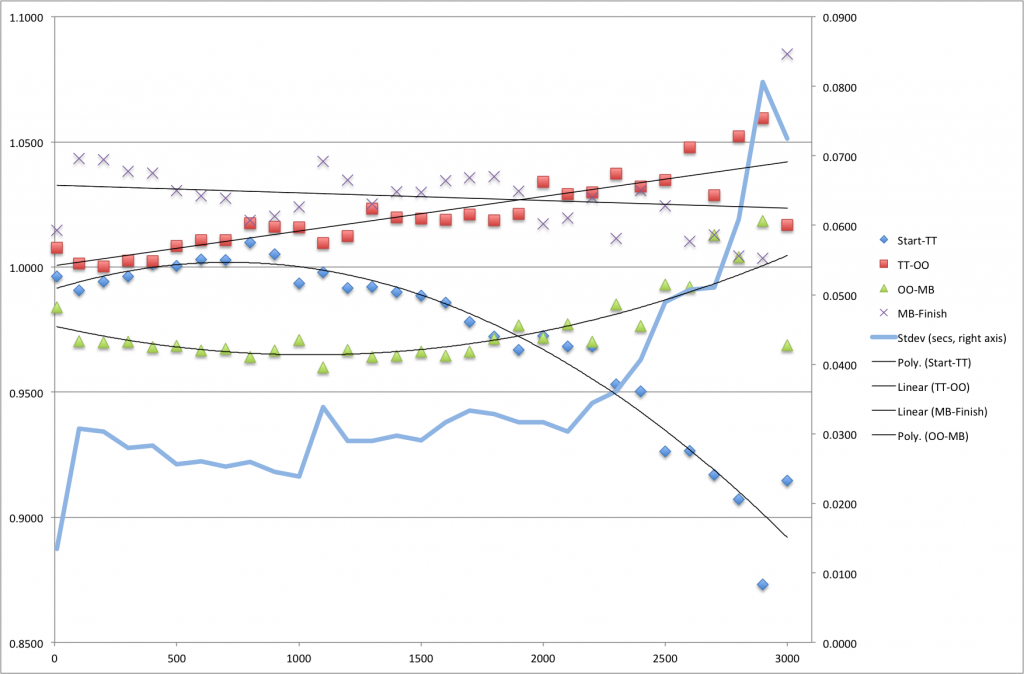 This chart is showing several variables. It shows the four split portions of the race—the start to Timber Trail, Timber Trail to OO, OO to Mosquito Brook and Mosquito Brook to the finish—broken down by each 100 finishers. But these are not the times, but rather the time for each segment as a proportion of the overall time. So it shows whether a segment’s time was faster or slower than the overall time. Note that a lower value is a faster speed—a value of 0.97 means that a kilometer in that segment was skied in 97% of the overall race time. For most skiers there’s a 6% speed differential between the 23-38k segment and the 38k-5k segment.

Not surprisingly, the order of the segments, by speed, are:

Here’s a link to our trail elevation profile if you’re interested.

It also shows best fit lines for each split segment (some linear, some polynomial), and it shows the standard deviation of these four segments for each group of 100 skiers.

There are, however, some quite intriguing trends. The first is that early and late skiers ski the race very differently. The first 2000 skiers ski a pretty even pace to OO, pick it up on the downhills and then struggle to maintain that same tempo on the hills after 38k and across the lake. There’s not much variability—about 3%—between their legs.

Slower skiers, however, ski a lot faster (relatively) for the first few kilometers, and struggle more from OO to Mosquito Brook. This second trend is perhaps attributable to the warming temperatures late in the race which slowed down snow, especially on south facing hills. But it also may be the case that slower skiers are not in as good marathon shape and slow down considerably by the end of the race.

And then there’s the top 100. The standard deviation from 100th place to 2000th place is pretty even—as are the numbers—as skiers ski different legs within about 3% of their overall speed. But the top skiers are only half as variable in their pace. And I don’t mean the Elite Wave, or the top 500: I mean the top 100 skiers. The order of their speeds is the same, there’s just a lot less variability. I attribute it to two things; pack skiing and training.

Early in the race, skiers are spread out enough that most skiers fall in to packs. This allows the skiers to draft off each other and retain energy, so that they can go faster later in the race. But you can’t just jump in one of these packs; you have to be really fast to get there in the first place. Me and the rest of the dregs in the back of the Elite Wave wave goodbye to these skiers pretty early on (i.e. before the power lines).

With superior training, they are able to ski faster times for the first 22k. It means that their downhill runs to Mosquito Brook aren’t as comparably fast. However, their edge really shows up for the end of the race. Where us mortals struggle up hills and in to the wind across the lake, the times for the top 100 guys are almost equal to what they were skiing at the start of the race. And there’s a sharp cutoff between these guys and the rest of the race. Statistically, there’s not much difference here between the 150th man and the 1050th. But there’s a huge difference between 50 and 150.

To break it down further, here is the same data, broken down by every 25 skiers (top 500 only):

It seems that there are really three separate groups. The top 50 guys have standard deviations of less than 1.5% and ski every leg within 2% of their average. Oh, and they don’t ski the last 12k appreciably slower than the rest of the race. The next 50 guys are still pretty steady, but their standard deviation is up to 2%, and they are faster on from OO to Mosquito Brook and slower from there to the finish.

Then come the rest of us: standard deviations around 3%, and speeds about 5% lower for the last quarter of the race. So I guess really good guys don’t actually bonk. (I wish I was that good.) Or if they do, it doesn’t affect them as much. In other words, if the Birkie wanted to properly size the Elite Wave, it would have the top 50 or 100 skiers. Do note: until/unless I get a lot better, I am not advocating this position.