The Birkie started in 1973. Since then, the race has been altered due to weather nine times. And with news that the lake is out, this year will mark the 10th. However, despite long-term declines in snowpack in northern Wisconsin, the race has just completed its longest streak of consecutive full Birkies in its history:

Looking at the longer-term trends, this (unfortunately) may be a hard record to crack again. Average snow depth has declined, over the past 70 years, at a rate of about one inch per decade, using snow depth data for Spooner and Solon Springs. Using just data from Spooner since 1973, the trend is flat, but this is rather selective. (I’ll have more of this analysis post-race.) 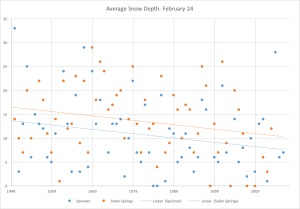 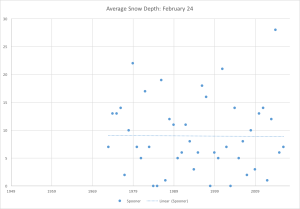 Let’s hope for as good a Birkie as we can get this year, and for better luck in 2018!