The 2012 Birkie was filled by November, 2011. That’s 9,000+ participants, each forking over $90 (give or take) to ski the race. Now I’m no math whiz, but, carry the one, divide by three, square root of—that’s just shy of a million dollars. Plus the Birkie Trail Run, parking passes and other donations. I know that the Birkie is a non-profit, and I’m sure that that money gets invested back in to the race, trails, and programming. But the Birkie has one of the best trails around (if not the best), fantastic grooming, and beautiful northwoods terrain. There’s room to grow, and, while I’m sure the folks in Birkieland have more well-founded opinions, since they are actually the ones working there, I have never been one not to bloviate.

And these are big ideas, but the Birkie is the only race around which has the ability to build a 20k, 20-foot-wide race trail over a couple of seasons (the Classic Trail), and a great trail at that. I’m sure the Birkie folks are working hard on preserving the trail access on the Telemark property and the new trailhead. So, think of these are long-term musings more than anything else.

• Road crossings. In The Guide I go on at some length about the road crossings. The problem is that when you throw snow on a road at 8:00 and the first skiers cross the road at 9:00, there are going to be problems keeping the snow in place for several thousand skiers, no matter how many volunteers you have shoveling. There are three main road crossings in the race, OO, Mosquito Brook and Highway 77. I think it would be a wise investment for the Birkie to invest in underpasses for these roads. I’d assume that there are minimal utilities to worry about out in the country, so it would be a manner of digging a trench and putting the road above it. Only enough clearance for a Pisten Bully and a foot of snow would be necessary, and it would not have to be full trail width—20 feet would certainly suffice. It would aid recreational skiers as well, who would no longer have to take their skis off to cross roads three times, and it would provide one of the longest trails without a road crossing around. The cost savings from the bridges (reducing race-day detours and traffic patrols and delivery of snow to the course) would not likely offset the cost, but it would not be negligible. A bridge could be built at OO (creating a 38k road-free trail) and the Birkie could get feedback from skiers regarding further bridging.

• Race day trail capacity. The Birkie is at capacity. Ask anyone skiing out of a later wave, and they’ll tell you that. Feeds back up. Hills get washed out. The start pens get unruly. Parking and bus queues stretch for miles. When you have nearly 10,000 people each with four six-foot-long things (skis and poles) you need a lot of space. The Classic Trail is fantastic and has made a huge difference, but with race subscriptions up even further, one, or more, of several steps could be taken to make the race a bit less crazy and improve the experience for all.

• Untangle the Timber Trail Tangle. At 9k, all of the races scream down a hill, merge, go through a feed, and then the races weave amongst each other as classic, skate, Birkie and Korte skiers make sure they are going in the right direction. It’s only one of two feeds for the whole race, and the other, at 4.5k, does not have the weave, and is on a wider section of trail, with a smaller hill leading in to it. Birkie freestyle skiers stay right, but everyone else has to bob and weave as the Korte skate race crosses both classic races. My solution (without splitting the races on different days): another bridge. This one would not have to be nearly as hefty as a highway bridge, just enough wood to get a groomer across. Since it would only take classic skiers, it would only have to be wide enough for two or three tracks—it could even be spec-ed out to carry just a snowmobile to set those tracks. It would make the area go from: 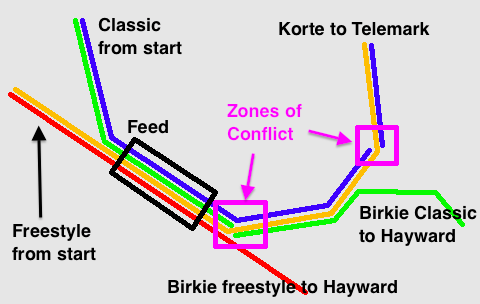 • Build the Classic Trail further. Many ski areas spend a lot of time and resources to build a couple new kilometers of trail. The Birkie spent $104,000 over three years and built 25 kilometers of the new classic trail, twenty feet wide, creating several recreational loops and giving the classic skiers their own race for the first 25k. Beyond that, they’ve put two tracks on one side of the course to divide the skiers, but the trail is still rather narrow for the thousands of skiers who pound the 50k from Telemark to Hayward. Another 20k of classic trail from OO to Highway 77 would not only provide more recreational skiing opportunities, but allow the classic race to travel almost entirely on its own from Telemark to Hayward.

• Put the Korte on Sunday. Until 2000, the Korteloppet traced the Birkie course but ended at OO. The Birkie built the 17k Korteloppet Trail at that time to loop the Korte back to Telemark. The races still start together, and run the first 9k to Timber Trail before splitting off. With the races at capacity, this is the most congested 9k of the course (especially after the wide expanses of the power lines). One idea would be to move the Korte to Sunday. Heresy! Yes, I know. But it makes sense:

• Spread out the waves. Right now, the Birkie will take your fastest qualifying time from the last three years for wave placement. All skiers over 65 are guaranteed a spot in wave 3, and new racers can use qualifying races to get in to wave 4. This means that the sizes of the waves are quite skewed, with 500 to 600 freestyle Birkie skiers in each of waves 1 to 5, but only 100 to 300 in the later waves. There would be a rough patch when people who’d always identified themselves as “wave three skiers” were bumped down to wave five, but the smaller waves would uncrowd the trail in the earlier waves and would be beneficial to all skiers.

• Increase on-trail Birkie lodging options. In the northeast, two organizations are building backcountry, hut-to-hut ski lodge networks. For they most part, they’ve had to build the trails there as well. The Birkie has a tremendous trail stretching 30 miles, smaller interconnected networks (and close to 150k of interconnected trails) and yet the only trailside lodging is at Telemark, which is a great place to stay for the race but lacks an ambiance that appeals to skiers at other times. The hotel rooms are plain, the food is (at least recently) not great, and the snowmobilers are, well, snowmobilers.

Imagine, if you will, driving to a trailhead, snapping in to your skis, and carrying a light pack with some clothes, snacks and a water bottle a few kilometers to a backcountry hut. The hut is miles from the nearest road or snowmobile trail, and the woods are silent. Inside the hut, a crew is preparing a four course dinner, a wood stove is roaring to warm the interior and the roof-mounted solar panels give plenty of power for lights. The smell of fresh-baked bread is overwhelming when you open the door. There’s no television, but benches and chairs, a library, and small bunkrooms for groups and families. Dinner is served at 6:00 (with, perhaps, a couple of beers on tap), and you pass the rest of the evening by the wood stove or in the sauna, before retiring to your bunk for a solid night’s sleep.

The next morning, you are awakened to a hearty breakfast, and have the option to purchase a trail lunch. If you are staying over, you have hundreds of kilometers of trail at your fingertips, and you can come back for a soup or a sandwich. If you are moving on, you can take your belongings or have them skied or snowmobiled to a hut a short day’s ski away. You’re detached from roads, cars, and cell phones, and your only responsibility is to show up for dinner, relax and ski. Even if you are just out skiing in for the day, you can get a hearty and warm lunch before going on your way.

This is not a dream—it’s a model. Maine Huts and Trails, in central Maine, has built three of what will be a network of twelve ski-in, ski-out huts. (They’re open in the summer, too, for silent sports enthusiasts, and of course Birkieland is also home to hundreds of miles of CAMBA trails.) The venerable Appalachian Mountain Club has three of their high mountain huts open for winter hiking or backcountry skiing (the others are too high, cold and exposed to stay open) and has recently opened or rehabilitated three lodges in Maine which are connected only by trail.

And if it were built, I think they’d come. Bringing more tourism to the greater Cable-Hayward area means more year-round income for the area. The trails are fantastic, but to make a vacation out of it there’s little between a room at a motel and buying a cabin. The Maine facilities are four-plus hours from the nearest population center, yet have become magnets for weekend getaways and weeklong stays. With the Birkie Trail less than three hours from Minneapolis and four from Madison, it is perfectly situated to draw guests from the largest ski communities in the country, and, with unique lodging and world class trails, the rest of the country and the world.