Place among women in 9th wave: 1

Rank amongst women based on skiers passed: 2

My sister Stacey—who is living in Madison—and I started behind a human wall of people. 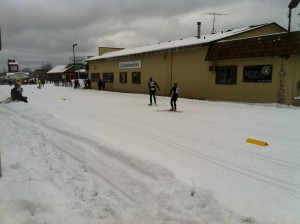 Jess brings in the front of the 9th Wave women as the BirkieGuide.com editor fumbles for his phone to take a fleeting picture as he pants, heart pounding after a 200m run.

Our warm-up consisted of sprinting to the front of the skate Wave 9 start. I passed approximately 3000 people.

I skied with three guys from Wave 9 for half the race: tall, nice, good-skier guy; good-technique-nice-uniform guy; and goofy, baggy pants/jacket flailing-poles guy. For a while, I thought they were all going to beat me, as they’d blast ahead past me (ain’t no Wave 9 girl going to beat ME!), but Baggy-pants and Uniform kept tripping over themselves/other people in their fury to pass me. Even Tall-guy got tripped at some point and I never saw him again … hopefully he didn’t break a pole or something. One by one they dropped off and I never saw them again.

Somehow I managed negative splits (oh wait, actually not that surprising, considering I started behind a human wall of people), managed not to succumb to leg cramps, and finished possibly first [according to the results, definitely first] out females from Wave 9. I have not actually studied the results to see where I finished out of Wave 9 finishers; perhaps Ari Ofsevit and his intuitive way with Birkie stats can determine this for me (he will, not to worry). I only know of one male from Wave 9 to pass me, and he had the same skis as me of all things (Atomic Worldcup). As he passed me right after 40k (right where my legs started cramping), he said “Hey, I like your skis!” I had enough breath to yell “You too!”

That’s the nice thing about ski marathons: They are pretty aerobic, so you can sometimes talk! Well good for him. The only other interesting thing that happened other than skiing for a few hours past beautiful snowy trees was that some lunatic started cheering really loudly for me at the end, who may or may not have uttered an “Oh Jesus” while stumbling and panting and running alongside me through mashed potato snow. (Thanks Ari!)