It’s happened: the Birkie has outgrown two races on the same day. (Remember, as many people skied the Birkie alone in 2016 as skied the Birkie and Kortie combined in the mid-2000s.) So starting in 2017, the Korteloppet will be on Friday. There are certainly pluses and minuses to this and while I think the Korteloppet would do better on Sunday morning, I understand why that might be a no-go. But with Telemark closed, it certainly makes sense to shift the finish of the race towards Hayward for all the races, and the recent additions to the Birkie trail help as well.

Update: here’s the official announcement email from the Birkie. We’re talking to the Birkie about a longer podcast discussion about these changes; stay tuned!

In any case, here are some pros and cons for having the Korteloppet on Friday:

As a Birkie skier, I am mostly unaffected by these changes, but they will by-and-large be positive for Birkie skiers. The main issue is that many Korteloppet skiers may not be able to take the day off on Friday for the race. However, there are probably just as many who will come early to ski Friday and watch Saturday, people who are now spectators but may decide to ski as well. It will be an interesting experiment, hopefully the Birkie will pull it off. 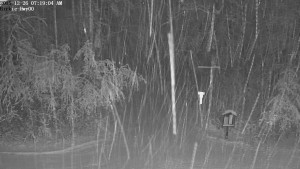 Actually, less. In less than two months, we’ll head out and ski asfastaswecan from Cable to Hayward. If the race were held today, we’d be looking at some of the best skiing ever. This comes mostly from trail reports, Ben Popp and the Birkie webcam which I drool over about twice a day. It’s been snowing all month in Hayward and north (perhaps a bit more coming off the lake up in Cable) and temperatures last topped 32˚ on the 30th. Of November. Current weather patterns don’t look to moderate any time soon.

Two months is a long time, and anything can happen; February thaws and meltdowns are part of the deal. However, you’d much rather go in to a period of warmer weather with 18 inches of snow on the ground rather than brave it with a thin base. So keep up with your snow dance, but, almost as importantly, just dance around for some sustained cold weather.

We generally keep this a family-friendly site here at BirkieGuide.com. BUT! There is now a live webcam at OO. So if you want to see pictures of snow, groomed, and on the Birkie Trail, you can. This is something I will probably be looking at daily until the race, and hourly starting in, well, as soon as there is snow. This is pretty darned exciting! (Of course, if you look right now, there are the vestiges of some early snow melting away. But this soon will move away!)