It’s February, I’ve bought my plane ticket to the Birkie (you can even save a couple bucks using the Delta meeting code NMJDQ, see here), and there’s some snow on the Birkie Trail. Not feet, like last year, but enough. So things are looking okay for the race, which is barely more than two weeks away!

So, it’s time for some good weather speculation. Which might be paltry this year. In the past few years, we’ve had a lot of weather speculation. Is it going to snow? Is it going to be cold? Is it going to rain? And we’d do that this year, again (and by “we”, I mean “I”) except I’ll be abroad. No, I’m not taking a vacation to Cabo, or something silly like that. I’m off to Norway. Quick aside: plane tickets to Norway in the winter are pretty cheap, as are hotels. Why would you go in the summer anyway? I’m going for ski orienteering world championships (yup, a real thing) to ski for a week (oh, and I’m going to have a chance to ski around Oslo as well), and won’t have a ton of internet connectivity; I’m not sure how much. So I won’t be on top of all the model runs, and hope there’s lots of snow when I get back.

Right now? It looks pretty okay. The past few runs have shown cool and mostly dry weather heading towards Hayward, but hinted at a few inches of snow in the next week, and no warm ups in the near future. I’d take that.

Anyway, if anyone wants to take over Weather Speculation, let me know, and I’ll give you the Elite Wave credentials to get in to the site. (Okay, it’s a password.) 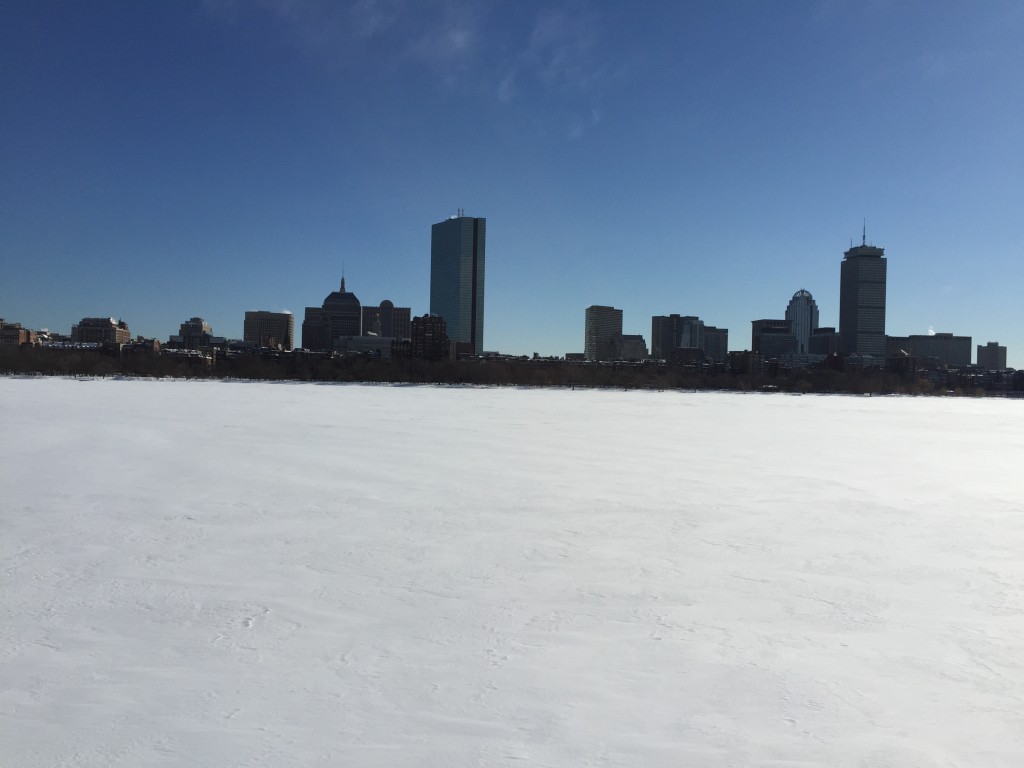 Of course, you know what else I’d take? 42″ of snow in a week. That’s what we just got in Boston. The old record was 31. Everything ground to a halt for a couple of days, but the skiing is great, and the scenery along the river spectacular. I may or may not have run across the frozen, windblown Charles the other day. If it crusts over, the river crust skiing would be epic. So I’ll try to send some karma the way of the Birkie. We don’t really need much more snow here, but we’ll take it.

Finally, a note on race reports. Several people have emailed me 2014 reports and I’ll try to post them, but I’m leaving for Norway on Friday and barely have time. Looking ahead, I’d love your reports for 2015. I am going to try to set up a blogging template on WordPress so that you can create your own race report (and I can do as little as possible …) but doubt that’s going to be in place. In lieu of that, a couple of guidelines to keep in mind (I’ll repost this after the race, but keep these in mind):

There will probably be more. But keep ’em coming!
And see you soon in Hayward.

Some of you know that I am living on the East Coast these days. (When I was in the Cities, I was the most prolific poster of trail reports on Skinnyski ever, which became a blog of its own, which had race reports, which became BirkieGuide.com, and then when I moved out east I made my own trail report site because one didn’t exist.) Despite marginal snow conditions in Boston, we’ve had enough snow up north that I’ve been getting some good training in (70-90k most weekends) and keeping up down in the city with November Project and manmade snow.

This weekend, however, I’m coming to the Cities for the Loppet. When I found out that you could ski two marathons for $130 and there was a ski orienteering race to boot, I was in. When I found a $175 roundtrip airfare, the deal was that much sweeter. The only option here is a three hour drive to the Craftsbury Marathon, again relegated to a 12.5k lap race. I’ll fly three hours, and race all weekend. And I mean all weekend: in 26 hours, I’ll race more than 90k. A little warming up and cooling down and I’ll have that elusive 100k weekend yet!

Which brings me to something that’s hard for me to do: tapering. Usually, I’ll run/November Project two to three days a week, and ski most evenings. Sometimes I’ll even drive a couple hours in the evening to ski real trails and hills. This week, I am having to limit myself. This afternoon, for instance, I did not go for a run. Wednesday, I’m not waking up early to do stairs. Friday, I’m probably going to take the day off. Isn’t that crazy?

So, tapering. It’s a thing! And after this weekend, it’s just three weeks to Birkie. So I’ll have to do it again then, too.

(Which brings me to some weather speculation: the next 16 days—more than half the time to the Birkie—on the GFS model show temperatures staying between -20 and +20. No real snow, but also no melt. It could be old, cold snow at this race. Thanks, #PolarVortex.