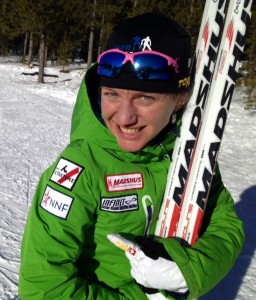 She looks nice, but she'll kick your butt on the ski trail.

You know what’s awesome about nordic skiing? If you email someone who’s really good, they’ll email you back. Such is the case with two-time Birkie champ and 2010 Olympian Caitlin Gregg, who was kind enough to answer some questions about the Birkie, the Olympics and life in general with us. See what she’s been up to and where she’s going—other than really quickly from Cable to Hayward on Saturday.

The whole of the interview is here. Cheer for her in Hayward, if you happen to be the first person in.

There’s been a lot of talk these Olympics about why cross country skiers fall down a the end of the race. (See here and here, for instance.) I’m not good enough to go hard enough to fall down like that (I will slump over my poles, but usually not collapse; I need to work on going harder) but I will expound upon why Nordic skiers do this and no one else does.

There are two elements that go towards pushing yourself so hard that at the end of a race you can’t stand up anymore. One: it has to be a long enough race. A 400 meter dash demands an extraordinary anaerobic effort, but isn’t long enough to completely drain your body. A 50k ski race? Well, yes. And two, and perhaps more importantly: you need a sport which uses your entire body. While runners do fall down from time to time at the ends of races, they have muscle groups which are relatively underused during the event: the legs put out more power than the arms during a marathon. In skiing, you are demanding peak exertion from every muscle group, draining everything down until you have nothing left anywhere.

And there aren’t many sports like this. Bicycling uses mostly legs. So does running. Of mainstream sports, it seems that only rowing and swimming are similarly full-body. Longer swimming races are long enough to qualify, and a 2000m rowing race is six to eight minutes (depending on the boat). Long, but not two hours. But then, at the end of a swimming race, you’re in bouyant water clinging to the edge of a pool; most of your weight is supported by the water. Grab the edge and you’re set. If you’re rowing, you’re sitting in a boat. If you’re on skis, you’re standing on narrow, slide-y strips of wood that have no business being balanced, at the same time trying to catch your breath. Oh, you may have just thrown yourself off balance to extend a foot across the line. And you may have been doing it for an hour or two, full blast.

So, yeah, while it might sometimes be a little overdramatic, you may fall down. Find me another sport like that, and I’ll race it 50k. Otherwise, see you in Cable.

You may be enjoying our annual weather speculation. Do note, we freak out about everything. Including a few days of 38˚ weather. (Okay, not really; we just don’t want it to be 38 on race day. And it won’t be.) There’s a foot of snow compacted on the trail. Not a foot in the woods (there’s two feet of snow pack in the woods), a foot on the groomed, packed and tilled trail. Back in the day I ran some data of previous meltdowns in the Twin Cities when we were looking down the pike a some warm weather and the conclusion was that in January it’s damn near impossible to melt a foot of snow. A little easier in February (higher sun angle) but it ain’t happening unless it’s 50 for the next few days. And rains.

Skinnyski is saying don’t panic. If there were marginal conditions, we’d be hanging on every degree. As the second linked article mentions, the only difference 38 vs 41 will make is how much transformed snow forms up top to till in to the base. It will just make it faster. Weather speculation is full of hyperbole because it’s just that, speculation. It’s almost more fun when there is some question about conditions in marginal years, although I’d much rather have this kind of weather every time. A month ago, I posted that we’d be fine. It’s been above freezing exactly zero times since then. So, yeah. Birkie. It’s happening, guys.

It might be really effin’ cold for the Birkie.

Just going to put that out there.

But first, Thursday. If you’re flying in on Thursday night, be forewarned that there may be some snow in MSP. Probably not enough to cancel flights, but maybe enough to allow you to move your flights around if things get tricky. Up in Hayward, you’ll probably see 2-4 inches of new snow, starting a little wetter and then, as the temperature drops, getting dry and powdery. This will be on top of a base which will see sun and temperatures in the 30s for the next two days, so the surface will transform in places (but perhaps not on north-facing uphills, which are most hills in the race). With new snow and lots of grooming, I would expect a course much like in 2011: mostly cold snow with a little ice mixed in to keep it fast, but not enough to require klister or anything.

On to the temperatures. They’ve been trending downwards. While at first it looked like the warmer air might hang on in to Birkie day, it now looks like it will depart on Thursday night. As high pressure settles in, winds will slacken. If they go calm on Friday night, with new snow, the temperature will drop, and we could make a run at the all-time record (-14) or the 2011 mark (-11). Luckily, we only get that cold if there’s no wind, so wind chills won’t be worse. And given the high sun angle, it should warm nicely, albeit only in to the teens, not the 30s. If it were early January, we wouldn’t be seeing zero.

Now things can change, and it could be warmer for the race. But the trends I’m seeing suggest colder. The NWS has been dropping their forecast temperature gradually, but they often build a regression to the mean in to long range forecasts. If the trends hold, make sure you don’t forget your wind briefs.

So after threat upon threat of a thaw seemed like a major possibility, recent guidance has pushed the freezing line southwards. It now appears that any warm temperatures in Birkieland will be minimally above freezing, quite possibly not enough to transform much snow. In addition, while the storm later in the week has been drifting off the models, a storm closer in—on Monday—should drop several inches of fresh snow on the course.

In other words: there will be a lot of snow on the course!

What we’re looking at are highs in the low 30s during the week—Tuesday, Wednesday and Thursday. There’s then a chance of snow on Friday, and with it cooler temperatures, with highs in the 20s. This should allow the course to set up nicely, but likely with some new snow groomed in, so it won’t be an icy, frozen base. An early call for Saturday would be temperatures around 10, perhaps a slightly breeze from the northwest, and some lingering snow.

But this can, and will change. So wax up those softer skis. Or leave them for the pros (shameless promotion of advertisers, look to the left). Also note that if you need last-minute lodging, check this out.

We are one week and one hour (and four minutes as I type) from the start of the Elite Mens freestyle race. One. Week. Away.

The GFS has backed off of any real warm-up, and looks cold and dry for the race, with a few inches of snow midweek. It had been showing a “Panhandle Hook” type of storm before the Birkie, this is now delayed until Saturday evening and only a few inches of snow.

The ECMWF has the hook coming through on Thursday, and then colder weather for the race.

If I had to guess right now, I’d guess some fresh snow with some refreeze mixed in, temperatures at the start around 10. So it will probably be 30 and blizzarding; we’ll see.

(Anyone else catch MPR news drop the B-word yesterday?)

In a week, I’ll be in Hayward.

Let me take some ibuprofen; my fever has gotten high. And repeat:

IN A WEEK, I’LL BE IN HAYWARD. Say it with me. Again and again. There is no cure for the fever.

On to weather speculation. In the past day or so, the models have backed off of the very warm temperatures—to a degree. It looks like we won’t see temperatures breaching the 40 degree mark, and with cool nights the snow, if it transforms, will do so minimally. Then, there’s new snow. A few inches on Monday are likely. Then warmer Tuesday through Thursday.

After that is a wild card. The models have been flip-flopping, but a relatively constant theme is some snow. Some (the 00Z run of the Euro, for instance) have shown warm, wet snow the day before the race. Others (the 12Z GFS) show a cold front swinging through and more southeast weather system, which would bring several inches of cold powder during the race. But it could be a particularly white Birkie this year.

And it should be a nice ride for the next few weeks. Stay tuned!

Because I know of one!

Back in my collegiate days, our lovely coach’s parents put us up in Drummond. Great, people, fantastic food, and a lovely place to stay. Someone had burned down their barn pre-Birkie a few years back (I won’t say who) but it’s since been rebuilt and is a lovely place to stay. (Plus, it has a pool table. Pool table!) It’s in Drummond, so it’s a 20 minute drive from Como Field, and as an added benefit you come in from the north, so much less traffic. They have reasonable rates for the Birkie, especially on such short notice, and I can not recommend it highly enough.

In other words, if I hadn’t lined up lodging already, I’d stay with Jim and Mimi. Interested? Email Jim at jcran@cheqnet.net. If you’re otherwise planning to stay in a motel in Rice Lake or the middle school gym, this is well worth it.

The Birkie has a page up of “New in 2014: what you need to know now.” You really need to know it next week, but that’s a digression. Here are some #PROTIPs on some of the changes that are in store:

“I don’t know whether the weather will improve.”

10 points if you get that Simpsons reference.

Anyway, the weather a week out looks, well, interesting. After two months the polar vortex (I’m not going to get in to explaining how it’s actually a thing that the news media latched on to because it sounded cool and bastardized) is retreating back to its home near, well, near the pole, allowing a more westerly flow from the Pacific to feed slightly warmer air in to the region. So instead of highs around 5, the highs will peak in to the 30s next week.

And what does this mean for the Birkie? Well, several things:

There’s a lot of time, weatherwise, between now and then. But not much time Birkiewise! Get that fever!