Never say never, but I can not see any circumstance right now which would lead to anything other than a picture-perfect postcard race.

I’ll go right out and say it here: there is about as close to a 100% chance that the Birkie will go off on February 22 (and the Korteloppet the day before) as there ever has been. 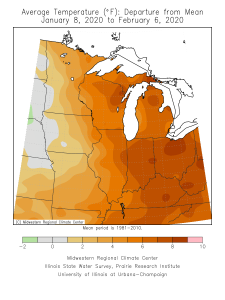 The last 30 days, temperature-wise, from the MRCC

This is not, however, for atmospheric lack of trying. Much of this decade, winter has been dominated by the (scare voice) polar vortex. As the polar jet stream as weakened, cold air has spilled south to send frigid air to Birkieland and nearby. Some years have stayed cold the whole way through (2014). Some have been variable. Last year January was quite warm overall, even if the second half of the month saw several days staying well below zero. January of 2017 had seven days in Hayward with a high below 10, and this January that happened just once. This year was warmer, overall, than 2017. Yet the highest recorded temperature in January in Hayward this year was just 34, while in 2017 there was a week straight with highs above 38, and several days in the 40s.

In fact, since 1998 (before which there is a gap in record keeping in Hayward), there has been only one other year when the temperature in Hayward has stayed below 35: 2011. Despite being warmer than all but three years of the past 23, January this year stayed just cool enough to keep the snow around. Sure, it reached 34 four days in a row. But 34 doesn’t really melt snow. (Yes, I know, it it 45 earlier this week. But the snow is surviving.) 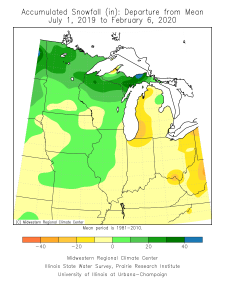 This year has had a zonal flow, with modified Pacific air predominating with only small blasts of arctic cold. It hasn’t been particularly wet, but there’s no snow drought, either. The snow fell early in Birkieland, and it’s stayed around. Here’s a map of snowfall in the Midwest. See that little dot in the middle of Northern Wisconsin? That’s the Birkie. (Interesting to note, the Keewenaw has seen less snowfall than normal, but the eastern UP a lot more.

So the Birkie has a foot-plus of packed base. What does the next week hold in store? All signs point to more of the same.

More of the same is good. The American model out to the Birkie shows it staying colder than it’s been, with a few days dipping below zero. The European model is a bit warmer, but still keeps Hayward below freezing. Both are reasonably dry. But that means a fast, transformed, set up course, not one the Birkie has to plow with Pisten Bullies the day before the race.

This is definitely something we can get behind!

Weather for race day? Who knows! It’s two weeks out: we can deduce some trends, and make educated guesses. But as usual, the start pen temperature at this point should be somewhere between -15 and 45. 15 above is a pretty good guess. But don’t start panic waxing too quick. 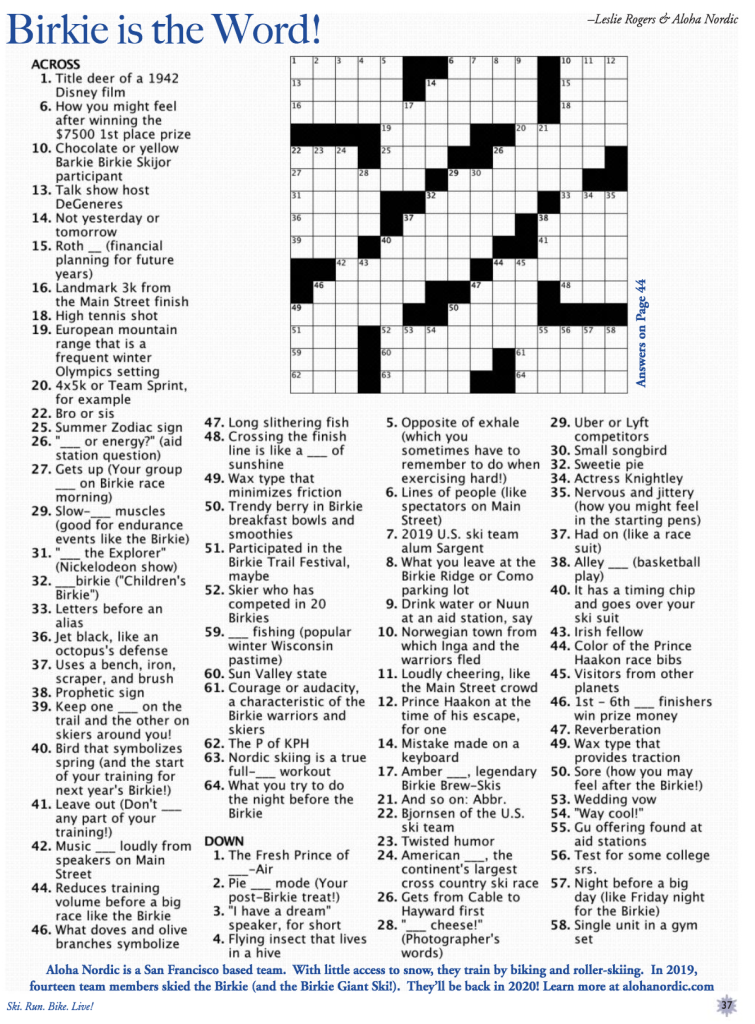 Combined, we have 11 Olympic appearances. I’ll let you guess who has zero.

But Kikkan and Brian were kind enough to come on the podcast and talk about their race preparation, and how it is to go from skiing towards running (and probably back to skiing soon).

Find the podcast here, or download the .mp3 directly here if you want.

Just in time for the trail running festival this weekend. Take a listen on your device, or download the episode here.

And here’s the iTunes link. Is it even called iTunes anymore? I should figure out how to put it on Spotify, too.

Another entry to the burgeoning field of aggregating race results, this with data back 20 years! Birkielo (an elo rating system for ski races) gives you a score based on where you placed in races (taking in to account the strength of the field, using math!). Also, if you’ve skied a lot of races it doesn’t show all the results. Still a very cool tool, and probably has results going back as far as I’ve seen!

Thanks to someone who dug up and posted about the 1980 Wisconsin public television half hour piece on the Birkie. Some good sights to see as skiers tackled the course four decades ago, striding the course from Telemark to Hayward. And Mitch Mode, who is featured in the video, is now a Spirit of 35er, and finished the classic race this year in under 5 hours.

This year, the entire race was streamed live and is up on the Internet.

My favorite point is at 1:51 in to the video, when the men’s Elite field’s leaders pass a female skier wearing a colorful race suit and bib 501. None other than Kikkan Randall. She pulls off and double poles and the racers glide right by. The best part? The announcer doesn’t even notice!

Around 2:17, the men pass the women, just before Bitch Hill. I’m sure they’re working hard, but they look better on Bitch Hill than I did! Both races formed in to small packs around Highway OO, with four women and three men skiing the second half of the race together. At 2:38, Alayna Sonnesyn breaks the women’s pack on the Highway 77 climb, and the men stay together to the finish. The men hit Main Street at 2:49 for the sprint, and the women a minute or two later.

Congrats to the winners … and to everyone else who didn’t make the video.

Not a bad Birkie. A little snow, a little soft, a lot of skiing. And, no, the drizzle and rain that some predicted didn’t exactly materialize. The course skied cold and soft. This is quite often the case.

Way before I had the chance (or time, or energy, or skills) someone’s gone ahead and posted a bunch of data visualization. Check it out! And stay tuned for podcasting in the next few days. We have a bit of editing to do, but it should be a good podcast this year.

I may even post a personal race story for the first time in … a long time.